Put very simply, metadata is ‘data about data’.   Although this may sound a bit strange, it is actually something you probably use all the time.

Think about a library catalogue entry, or your favourite software application for organising music.  In your browsing window, information is listed under certain headers that tell you about what you’re listening to.  This may include: 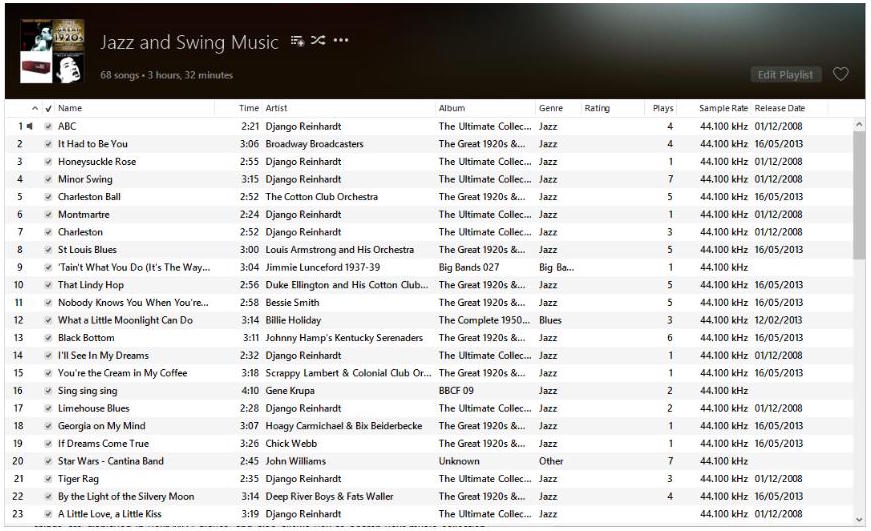 This is an example of metadata

“Why do we have metadata?”

In the same way that we can create lists of songs or artists based on the metadata information we have collected for them, we can use the same techniques to bring together different types of data for researchers.  The structure of a music library is very much based on the model developed by traditional libraries, archives and museums, and works in the same way, allowing the user to bring together records and ‘filter’ the results in a search across all of them.

Metadata on its own for a single item is useful, but doesn’t give you the full story about the content of the digital item.  So from that perspective, it’s not going to give you detailed information about the ideology of protagonists in the Russian Revolution (for example), or how the brush-strokes used by an Impressionist artist differed from those of a Romantic painter. However, what metadata can do is give an initial structure to collections so that like can be categorised with like.  An audio file contains only sound signals: it doesn’t ‘tell’ us whether it is a song performance by Billie Holiday or a 1956 interview with a Hungarian nationalist.  But creating the metadata to accompany these records, we can tell quickly and easily which is which, and search for all songs by Billie Holliday, or all Magyar interviews – or indeed, if the metadata is rich enough, for all jazz recordings or all Eastern European interviews.

Metadata in the form of catalogue records has a long and established record of facilitating searches for evidence.  For example, if you were working in feminist literature studies, and you wanted to research popular themes of women’s writing during periods of conflict in the 20th century, you might look at metadata from a library (or consortium of libraries) to find all the titles written by female authors between 1900 and 1950.  A good catalogue might have information about the genre of the titles, the date and place of publication, and may also have ‘keywords’ also listed within the metadata.  This high-level search can reveal useful information, such as in which years women writers were more prolific, what countries had the most active female writers, whether there were trends in genre, or indeed in titles.   All of this will need to be checked against contextual information, such as the comprehensiveness of the holdings in the original catalogue and the accuracy of its records, but it makes for a very useful beginning.

Metadata is at the core of most conceptions of data interoperability.  We must be wary, however: if metadata is too strict, we can run the risk of having to over simplify a description in such a way as to effectively ‘hide’ useful information from a future user.  A folklorist might have collected interview in which people occasionally share local songs: is that music or an interview?  In addition, a computer will not know if metadata is wrong.  A slip of the finger could easily hide one or more accounts of the Irish Easter Rising if the date recorded for them is 1816 rather than 1916.  Similarly, if the entry of information within that metadata field doesn’t conform to the standard data type required in that field, it will also be missed out by a search.  For example, if the date that an item was created is needed, and the format is numeric (e.g. ‘1947’), then a search looking for items created between 1930 and 1950 will ignore items that differ in format (e.g. ‘c1947’, or ‘1940s’).